As I travel and engage in contemporary visual art, these writings summarize what I find to be "Best Picks". 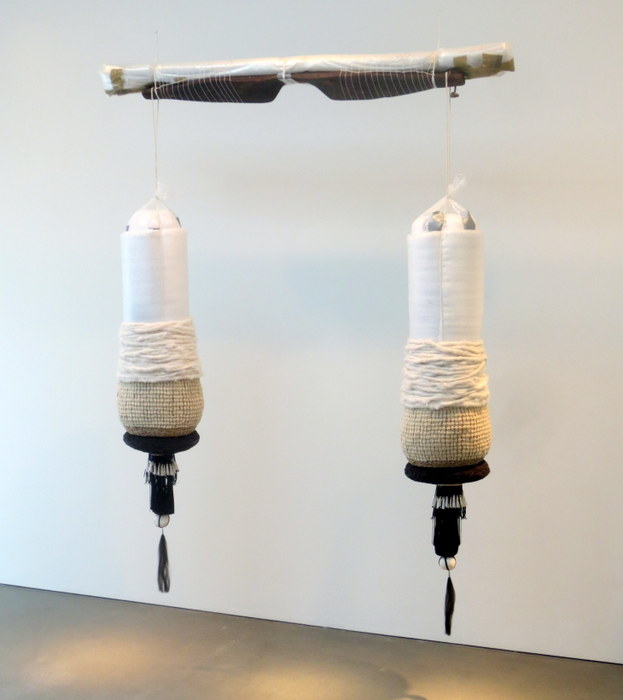 Make-Shift-Future at Regen Projects (Hollywood through May 22).
It has been 14 months since I last made art gallery rounds in LA.  My first stop at Regen Projects was a visual awakening that caused unbridled glee.  Curated by Elliott Hundley, the eight artists being shown repurpose excess materiality in pursuit of a very contemporary view of assemblage.  I realize now that my excitement in seeing this show was mostly based on the pleasure of seeing art in person once again. 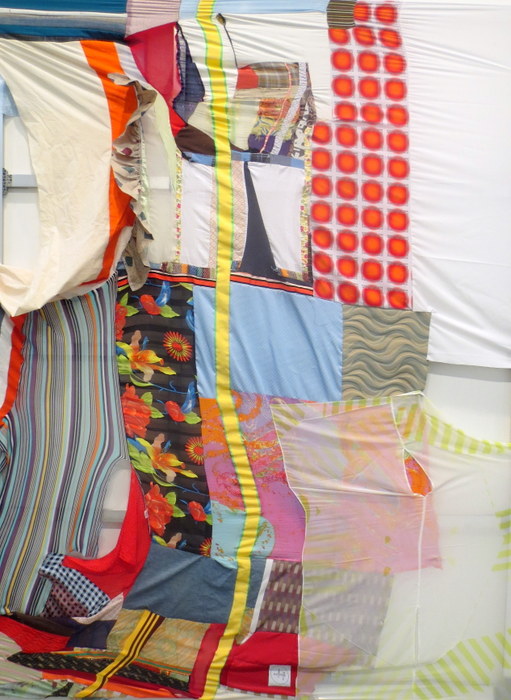 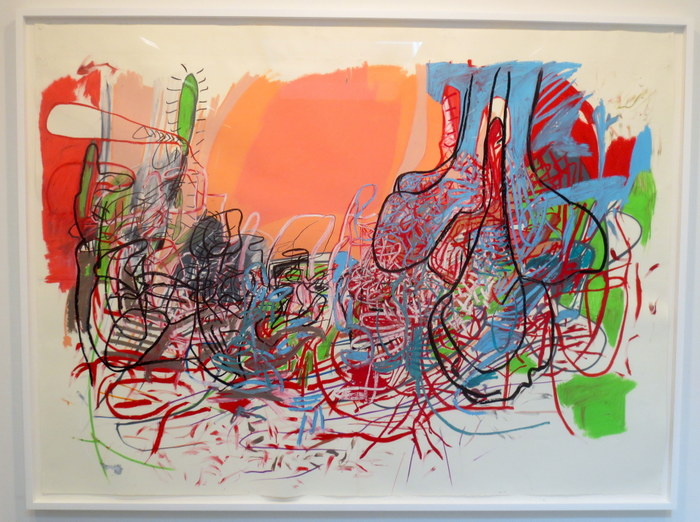 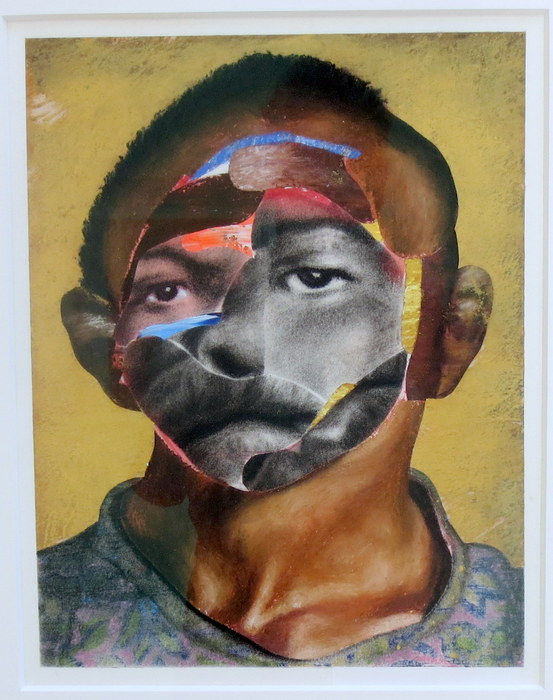 Otherwise/Revival at Bridge Projects (Hollywood through June 26).
Thirty-three artists have been curated into this expansive exhibition.  This is a terrific show.  From the press release – “On April 9,1908, from a home on Bonnie Brae Street in downtown Los Angeles, Rev. William J. Seymour preached a sermon on the spiritual gift of speaking in tongues that would change the course of spiritual history.  …sparking the Black Pentecostal movement.”  This exhibition is loaded with meaning and super-duper art making.  The artists have responded to what the Black Pentecostal movement has meant to them. 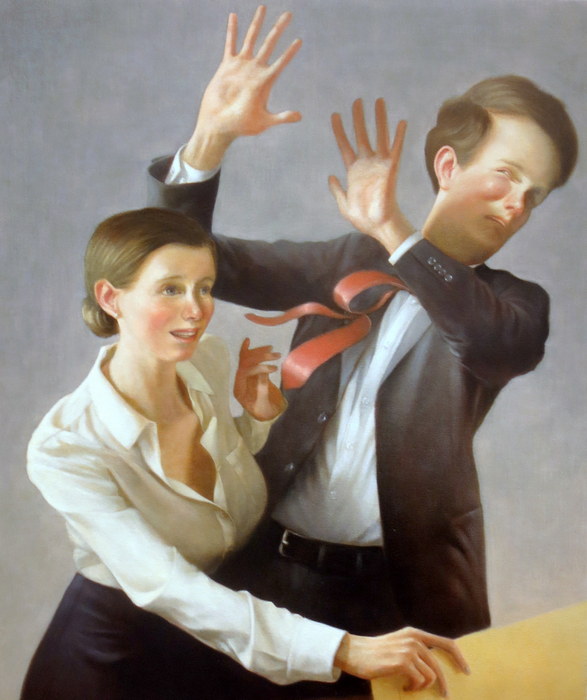 Pablo Barba at Steve Turner (Hollywood closing).
This exhibition is called “Business Casual”.  Barba’s paintings are inspired by historical genre painting.  He concentrates on scenes around the office.  His paintings take on a very contemporary innuendo. 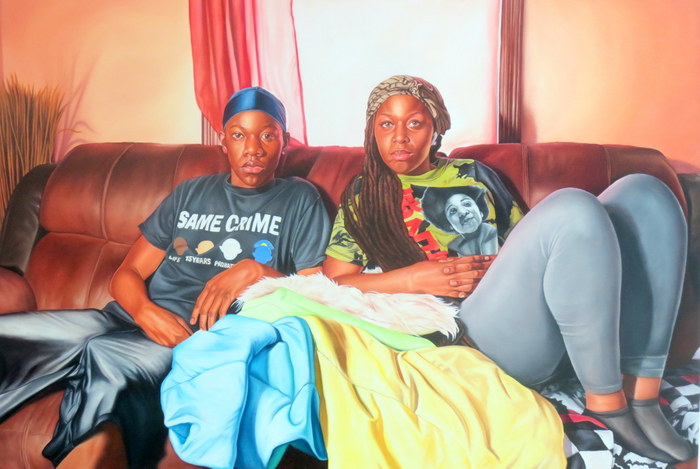 Shattered Glass curated by Melahn Frierson & AJ Girard at Jeffrey Deitch (Hollywood through May 22).
This exhibition presents work by 40 international artists of color.  Many, if not most, galleries are showing work by artists of color. Rarely before seen, this last year’s social upheaval has brought underseen artists to the fore. Stanley Whitney at Matthew Marks (Hollywood through May 8).
The paintings being presented here are not great.  But, they are positively affecting.  The work seems quilt-like with folkloric sentiment.  Whitney paints with a real sense of legitimacy. 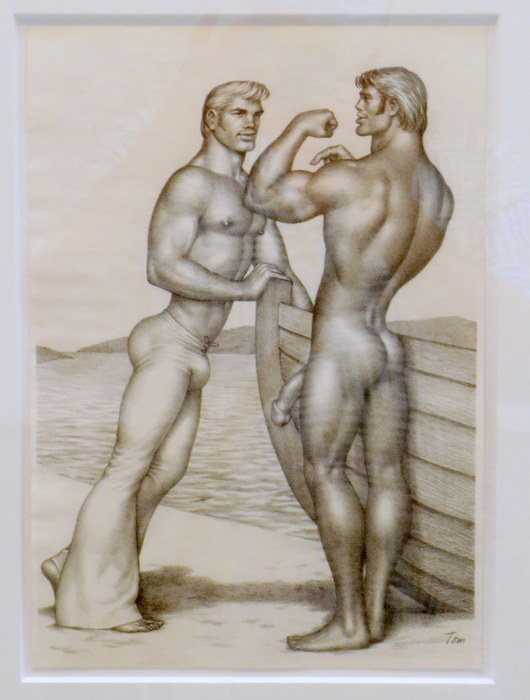 Tom of Finland at David Kordansky (lower La Brea closing).
Tom of Finland’s work always looks the same – year after year his subjects never age and his presentation of them never changes either.  T of F certainly draws very well and I think my response to seeing his work could be more “oh wow” if he indulged either in a different subject or altered his technique.  Same-o-same-o. 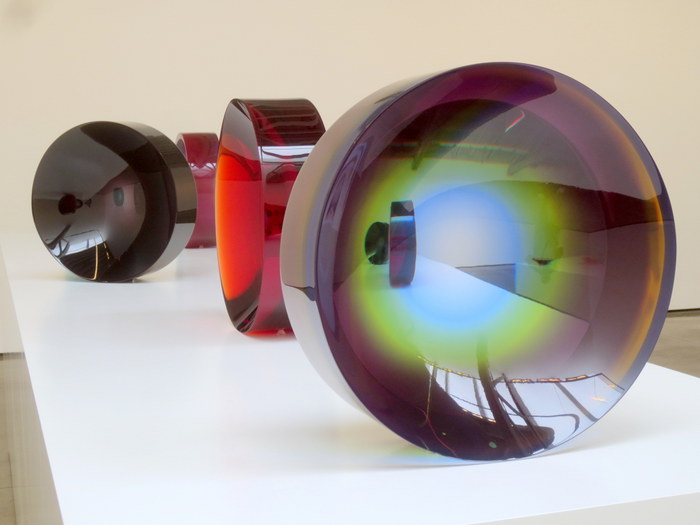 Fred Eversley at David Kordansky (lower La Brea closing).
Eversley is fairly same-o-same-o himself.  The work is always a variation on itself.  The technical excellence is not to be denied.  I try not to insist that artists evolve.  But in the case of Eversley’s resin sculpture he has the science of his work down.  I would appreciate seeing more spirituality. 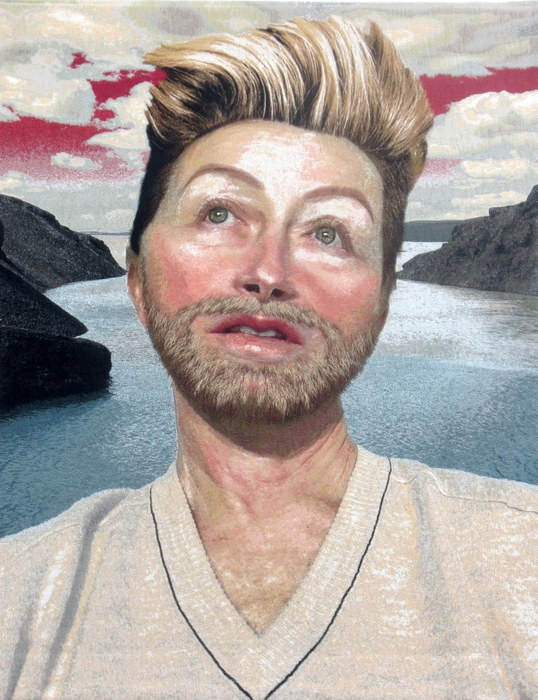 Cindy Sherman at Spruth Magers (mid Wilshire through May 8).
Translating her photographic self-images into Jacquard tapestries (woven in Belgium) at immense scale (111 x 88 inches) is spell-binding and arresting.  She has brought together the tradition of woven cloth, informed by the contemporary technologies of Instagram and Photoshop, to finally investigate the nature of identity and representation that until now, in her work, escaped me. 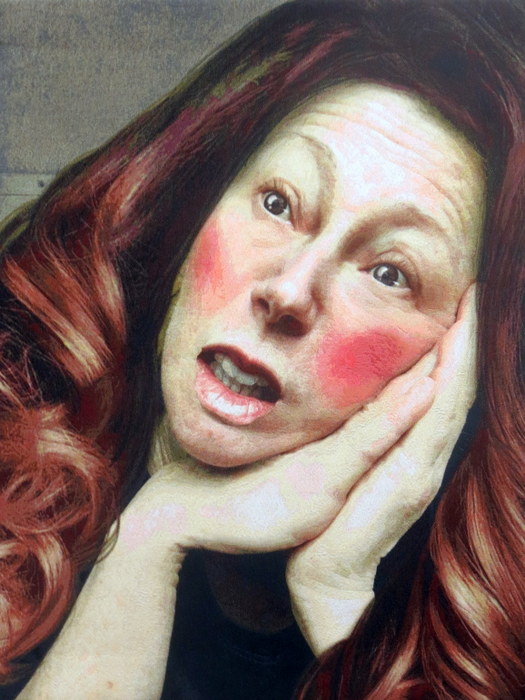 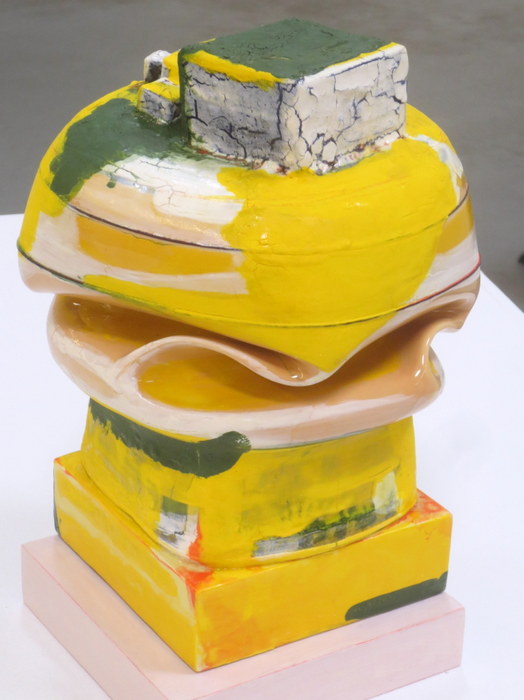 Kathy Butterly at Shoshana Wayne (mid Adams through early May).
I favor the thin-walled, intensely colored ceramic sculptures of Kathy Butterly seen in previous gallery exhibitions.  Her newest work is more massive (even in its table-top scale).  A student of Robert Arneson these newest sculptures seem to pay him homage.  Of the 14 tabletop sculptures in this exhibition, all but three of them have sold for between $30,000 and $40,000 each. 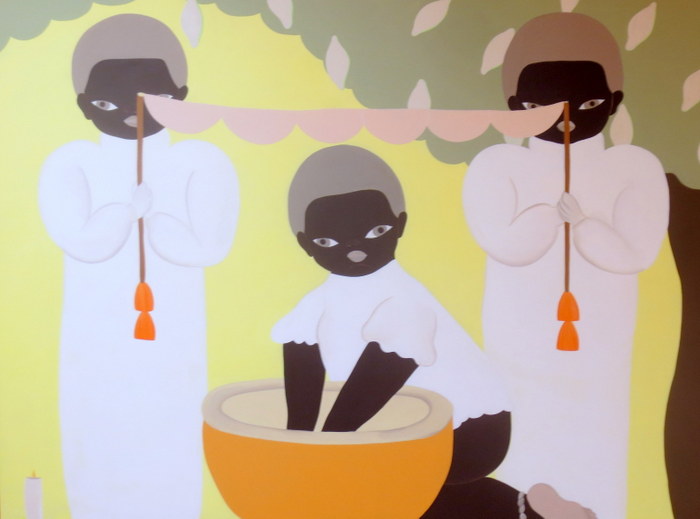 Asuka Anastacia Ogawa at Blum & Poe (Culver City closing).
Ogawa is Japanese-Brazilian and works in New York and Los Angeles.  The gallery press release probably sums up Ogawa’s painting best… “The works in the exhibition are both a meditation on interconnectedness and belonging, and an offering of sanctuary from and within a world in flux.”  They are quietly beautiful and serene. 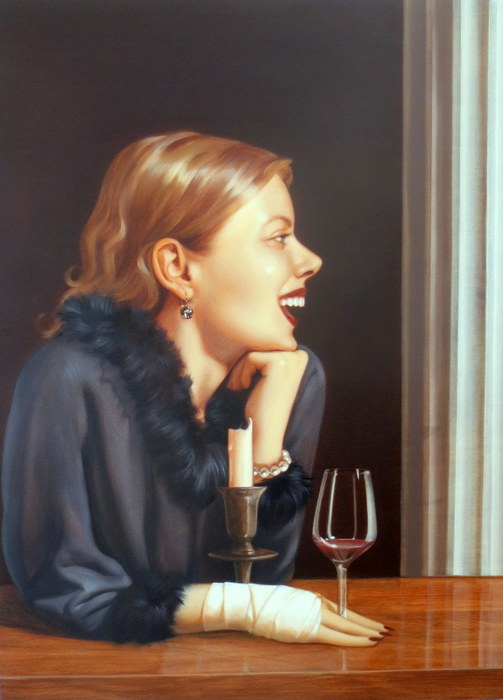 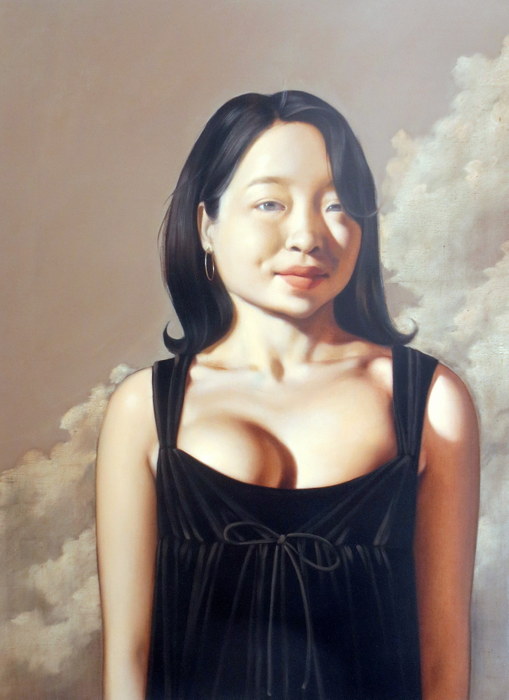 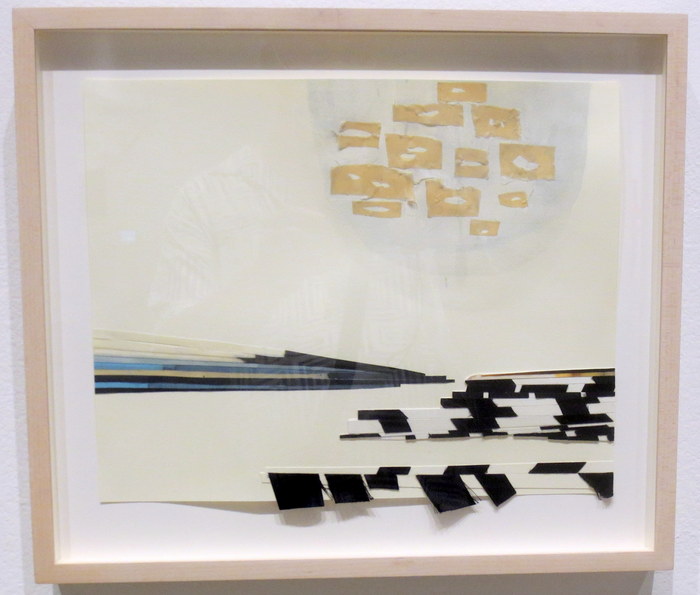 Cynthis Ona Innis at Walter Maciel (Culver City through May 15).
The apparent simplicity of applied fabric and acrylic watercolor on paper belies the poetry and elegance of her landscapes. 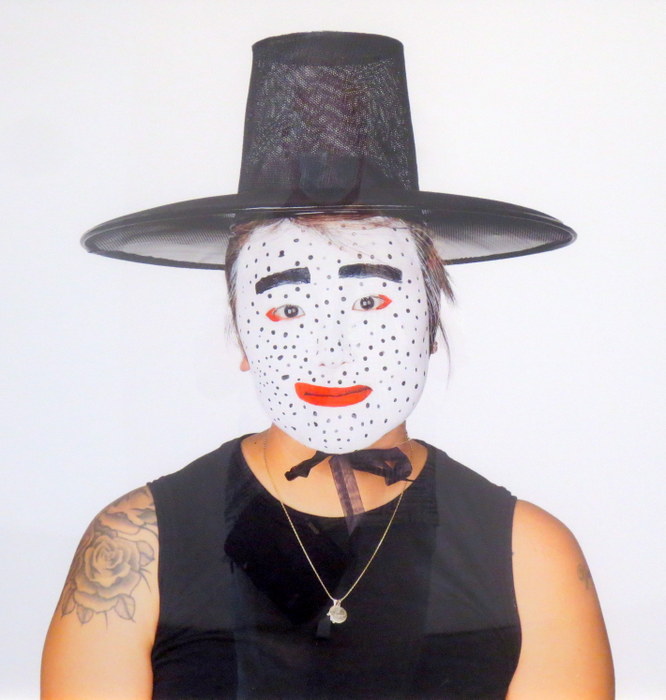 Dana Weiser at Walter Maciel (Culver City through May 15).
Dana Weiser was born to Korean parents in Korea and was subsequently adopted by a Jewish-American couple.  Her identity is firmly “American”. That her work uses the stereotypes of another “native” culture defines the nature of assimilation in the melting pot of the country she adopted. 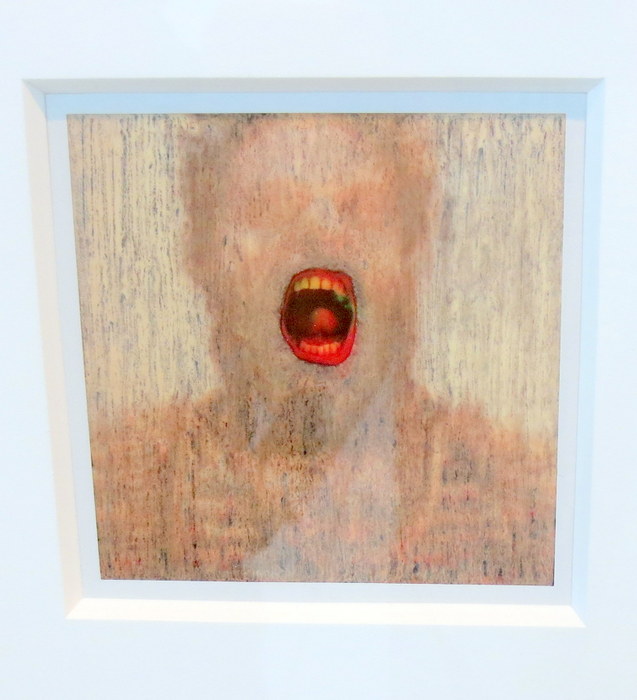 Lucas Samaras at Marc Selwyn (Beverly Hills through May 15).
There are four artists in a group show called “Technologies of the Self”.  Seeing early work by Lucas Samaras made this stop for me.  On view here are a couple early adorned boxes/reliquaries and a couple manipulated Polaroids from 1973.  Wow when I was 23 years old I was enthralled with Samaras boxes and Polaroids.  Though I never saw this work in person, it was like a “north star” for me.  Now 40+ years later I am able to stand before the for-real-work. 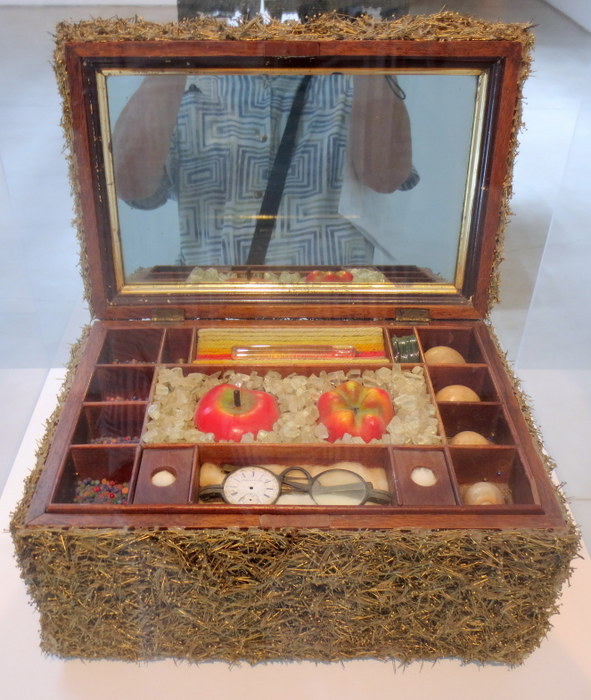 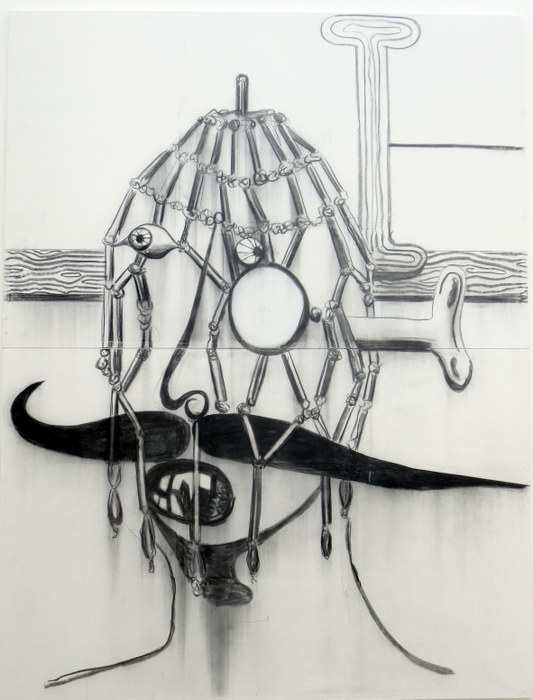 Albert Oehlen at Gagosian (Beverly Hills through June 5).
Oehlen must be high on Gagosian’s favorites list.  I have regularly seen Oehlen’s work in Gagosian’s London venues.  Each show is different – then again the same.  What is constant is their unabashed size and audacity. 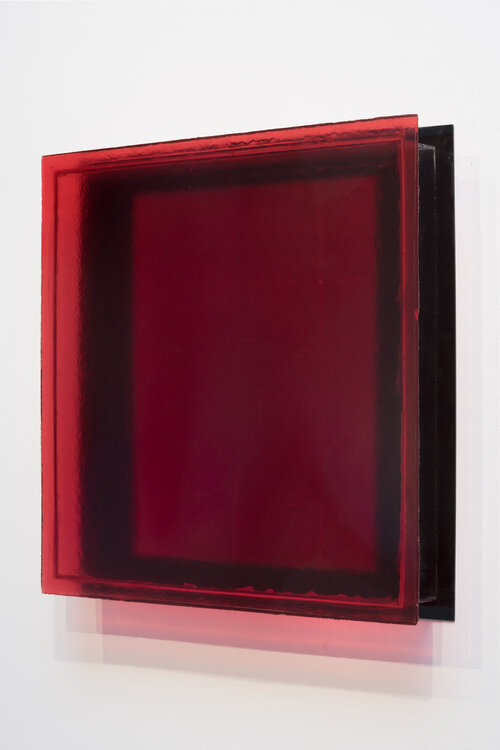 Ron Cooper at Louis Stern (West Hollywood through May 15).
Ron Cooper is associated with the SoCal Light and Space Movement.  The 1982 piece pictured above is typical of that period.  Now living in Taos, his new work consists of thin bars of plexiglass on which he sprays layers of acrylic medium, pigments, and suspended particles.  The surface appearances change with changing direction and incidence of light. 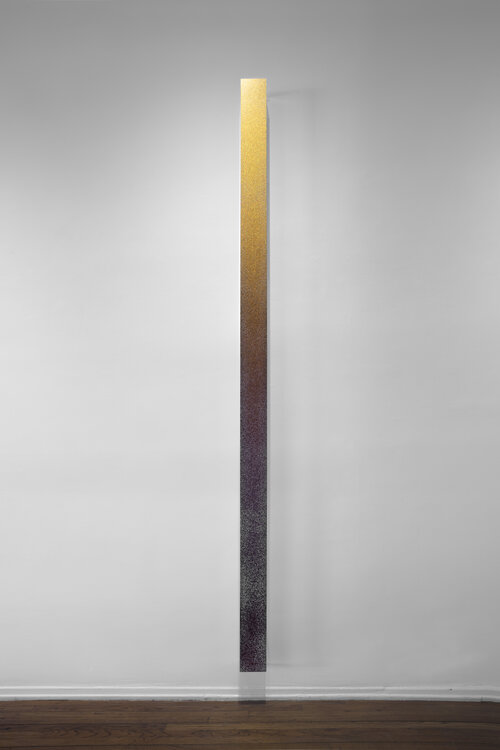 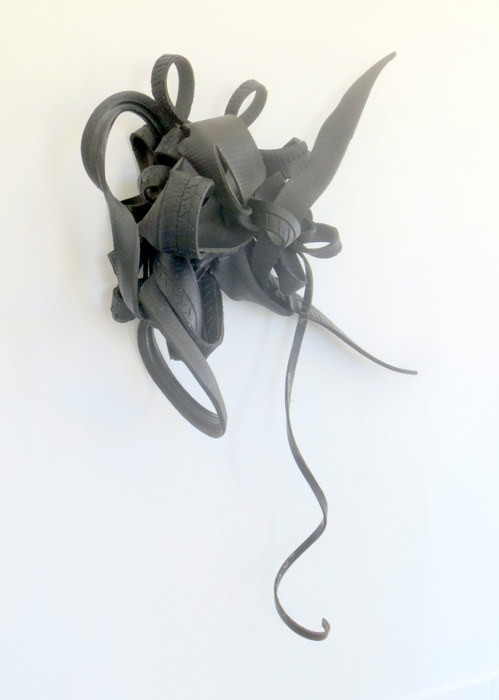 Chakaia Booker at M+B (West Hollywood closing).
Chakaia Booker recycles materials into sculpture.  The works in this exhibition are fabricated from old tires.  The act of slicing and cutting vulcanized rubber seems prodigious.  In her hands, amalgamating the cut pieces becomes poetic. 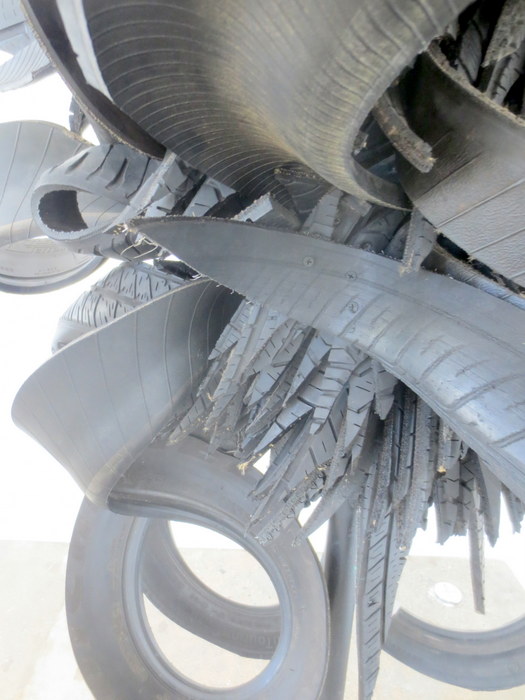 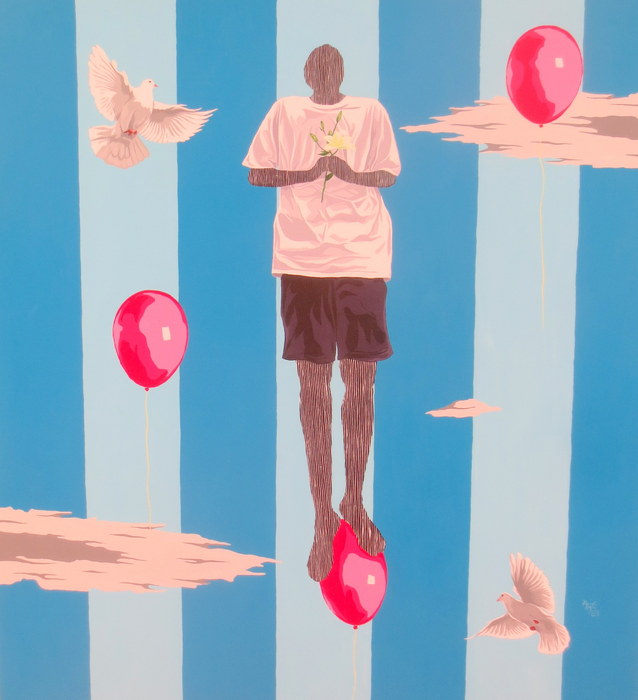 Ameh Egwuh at Rele (West Hollywood through May).
Rele is new to LA, this being her second exhibition.  Adenrele Sonariwo has a gallery in Lagos, Nigeria and this LA gallery is her second (a first footprint in the United States).  Ameh Egwuh paints his interpretation of life and the life after death.  Transitioning from one to the other is not “loss” but rather expansion.  I look froward to following this gallerist’s trajectory. 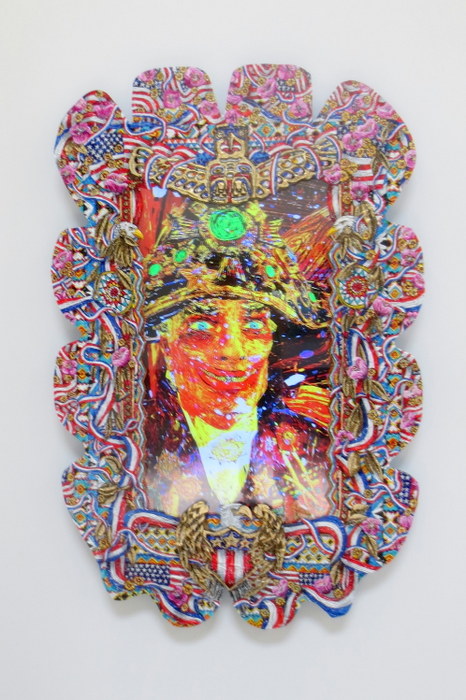 Frederico Solmi at Luis de Jesus (DTLA through June 19th).
Luis de Jesus has moved his gallery to Mateo Street in DTLA.  His space is now heroic in size.  Frederico Solmi inaugurates the gallery.  Solmi dominantly uses computing processes to produce his extravagant morality play films/videos.  There are so many skillful layers from the unique painted frames that surround the video monitors to the “films” themselves.  I must call his films, films.  The word “video” is too simple to describe the depth and nuance of Solmi’s art.
The opportunity to experience Solmi’s work wearing Virtual Reality goggles is beyond wondrous.  A peak experience.  Take this opportunity while you can. 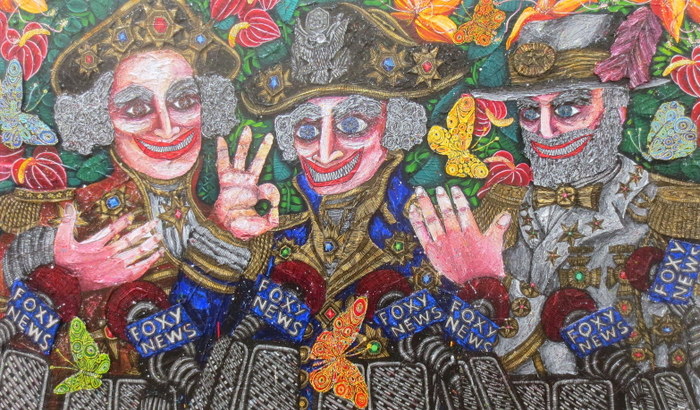 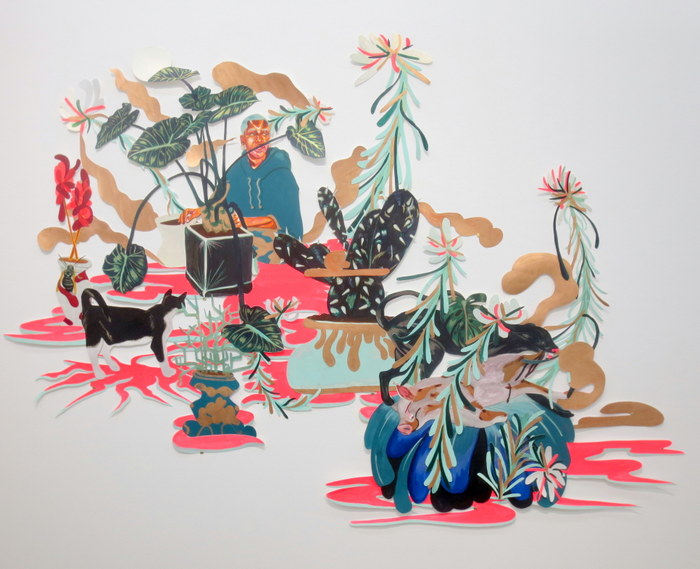 Khari Johnson-Rick at Night Gallery (DTLA closing).
With the pandemic dictating all manner of social interaction, my usual LA art rounds were anything other than usual.  Instead of my customary 60 or 70 gallery visits I was only able to make it to about 35 galleries.  Galleries tend not to have the usual documentation at hand.  Many want appointments for visits.  The whole process of viewing exhibitions has additional requisite layers.  Still the gallerists were eager to share their exhibitions and were generous in welcoming me back into the arena.  I could not be more thrilled to know that there is life despite COVID.

This is only a preview. Your comment has not yet been posted.

The letters and numbers you entered did not match the image. Please try again.

As a final step before posting your comment, enter the letters and numbers you see in the image below. This prevents automated programs from posting comments.

Having trouble reading this image? View an alternate.

(Name and email address are required. Email address will not be displayed with the comment.)